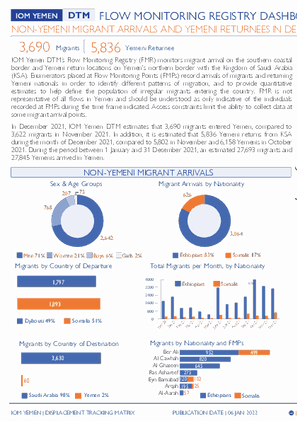 IOM Yemen DTM’s Flow Monitoring Registry (FMR) monitors migrant arrival on the southern coastal border and Yemeni return locations on Yemen's northern border with the Kingdom of Saudi Arabia (KSA). Enumerators placed at Flow Monitoring Points (FMPs) record arrivals of migrants and returning Yemeni nationals in order to identify different patterns of migration, and to provide quantitative estimates to help define the population of irregular migrants entering the country. FMR is not representative of all flows in Yemen and should be understood as only indicative of the individuals recorded at FMPs during the time frame indicated. Access constraints limit the ability to collect data at some migrant arrival points.

The migrant caseload was 83 per cent Ethiopian and 17 per cent Somali. The migrants are predominantly male (71%), with (21%) women, six per cent boys, and two per cent girls also among the travelers.

Through December reporting period, 1,893 migrants arrived from Somalia and were recorded 1451 at Ber Ali, 222 at Eyn Bamabad, and 220 at Arqah flow monitoring points in Shabwah governorate. In Lahj governorate saw 1,797 migrants arrived from Djibouti were recorded 820 at Al Cawhah, 645 at Al Ghaseen, 275 at Ras Ashareef, and 57 at Al Aarah flow monitoring points.

Data collected for these exercises should be understood as estimations only. They represent only part of the total flows passing through Yemen. The spatial and temporal coverage of this data collection activity is therefore incomplete. In addition, although data is collected daily, it is collected only during peak hours. The portion of the flows that occur during the uncovered hours is not represented. Data on vulnerability is based on direct observation and should be understood as mainly indicative.