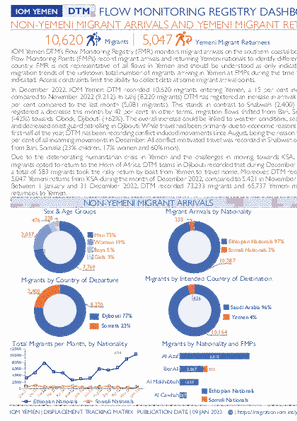 In December 2022, IOM Yemen DTM recorded 10,620 migrants entering Yemen, a 15 per cent increase compared to November 2022 (9,212). In Lahj (8,220 migrants) DTM has registered an increase in arrivals by 62 per cent compared to the last month (5,081 migrants). This stands in contrast to Shabwah (2,400) which registered a decrease this month by 42 per cent. In other terms, migration flows shifted from Bari, Somalia (-42%) towards Obock, Djibouti (+62%). The overall increase could be linked to weather conditions, sea tides and decreased coast guard patrolling in Djibouti. While travel had been primarily due to economic reasons in the first half of the year, DTM has been recording conflict induced movements since August, being the reason for 19 per cent of all incoming movements in December. All conflict motivated travel was recorded in Shabwah coming from Bari, Somalia (23% children, 17% women and 60% men).

Due to the deteriorating humanitarian crisis in Yemen and the challenges in moving towards KSA, many migrants opted to return to the Horn of Africa. DTM teams in Djibouti recorded that during December 2022, a total of 583 migrants took the risky return by boat from Yemen to travel home. Moreover, DTM recorded 5,047 Yemeni returns from KSA during the month of December 2022, compared to 5,421 in November 2022. Between 1 January and 31 December 2022, DTM recorded 73,233 migrants and 65,737 Yemeni migrant returnees to Yemen.