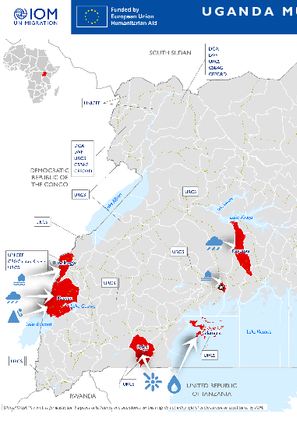 Heavy storms, hailstorms, landslides and floods are the major natural hazardous events that were reported in the month of November 2022. These were mostly triggered by the ongoing random erratic rains in Mbale, Sironko, Kasese, Bundibugyo, Tororo, Busia, Kayunga and Kampala districts. Land conflicts and fires were reported in Rakai and Kalangala districts, respectively.

A total of 7,963 individuals were affected representing 1,452 households and 332 individuals from 272 households were internally displaced by the disasters.  Adults (19-64) were the highly affected population group (49%) followed by children  below 18 (41%) and the elderly above 64 (10%). The most pressing needs are food assistance, livelihood, child protection, water, shelter, education, health and water supply in the affected districts.

So far in 2022, 126,102 individuals have been affected by disasters, representing 24,813 households. And a total of 21,115 individuals representing 5,670 households have been internally displaced disasters in Uganda. There were no other major disaster events reported from other districts and the infographic sheet only presents information received from represented districts.