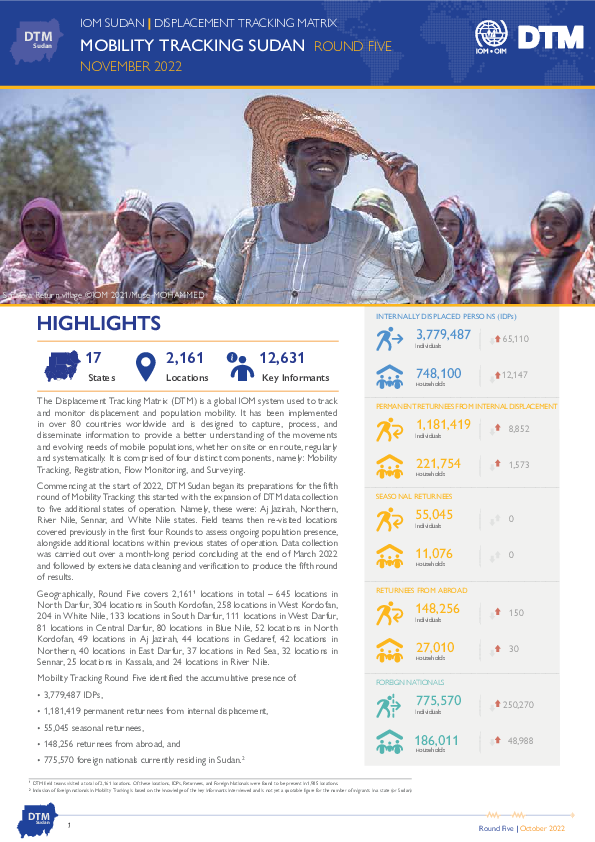 The Displacement Tracking Matrix (DTM) is a global IOM system used to track and monitor displacement and population mobility. It has been implemented in over 80 countries worldwide and is designed to capture, process, and disseminate information to provide a better understanding of the movements and evolving needs of mobile populations, whether on site or en route, regularly and systematically. It is comprised of four distinct components, namely: Mobility Tracking, Registration, Flow Monitoring, and Surveying.

Commencing at the start of 2022, DTM Sudan began its preparations for the fifth round of Mobility Tracking; this started with the expansion of DTM data collection to five additional states of operation. Namely, these were: Aj Jazirah, Northern, River Nile, Sennar, and White Nile states. Field teams then re-visited locations covered previously in the first four Rounds to assess ongoing population presence, alongside additional locations within previous states of operation. Data collection was carried out over a month-long period concluding at the end of March 2022 and followed by extensive data cleaning and verification to produce the fifth round of results.