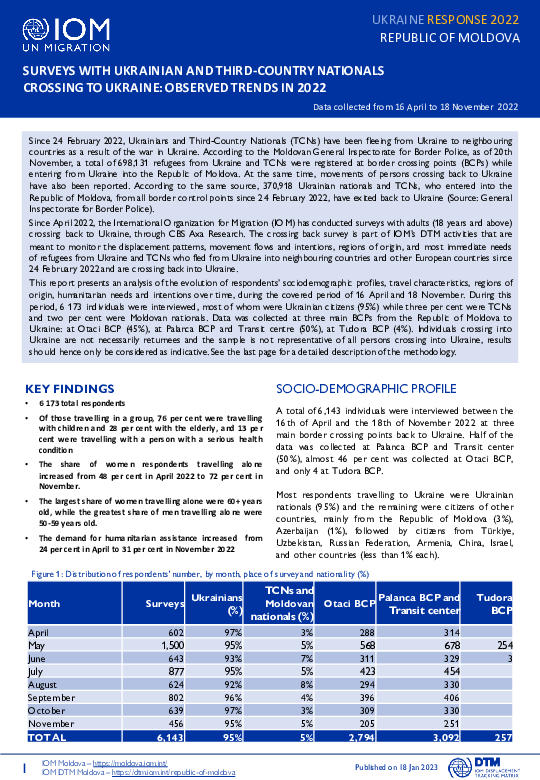 Since 24 February 2022, Ukrainians and Third-Country Nationals (TCNs) have been fleeing from Ukraine to neighbouring
countries as a result of the war in Ukraine. According to the Moldovan General Inspectorate for Border Police, as of 20th
November, a total of 698,131 refugees from Ukraine and TCNs were registered at border crossing points (BCPs) while
entering from Ukraine into the Republic of Moldova. At the same time, movements of persons crossing back to Ukraine
have also been reported. According to the same source, 370,918 Ukrainian nationals and TCNs, who entered into the
Republic of Moldova, from all border control points since 24 February 2022, have exited back to Ukraine (Source: General
Inspectorate for Border Police).
Since April 2022, the International Organization for Migration (IOM) has conducted surveys with adults (18 years and above)
crossing back to Ukraine, through CBS Axa Research. The crossing back survey is part of IOM’s DTM activities that are
meant to monitor the displacement patterns, movement flows and intentions, regions of origin, and most immediate needs
of refugees from Ukraine and TCNs who fled from Ukraine into neighbouring countries and other European countries since
24 February 2022 and are crossing back into Ukraine.
This report presents an analysis of the evolution of respondents’ sociodemographic profiles, travel characteristics, regions of
origin, humanitarian needs and intentions over time, during the covered period of 16 April and 18 November. During this
period, 6 173 individuals were interviewed, most of whom were Ukrainian citizens (95%) while three per cent were TCNs
and two per cent were Moldovan nationals. Data was collected at three main BCPs from the Republic of Moldova to
Ukraine: at Otaci BCP (45%), at Palanca BCP and Transit centre (50%), at Tudora BCP (4%). Individuals crossing into
Ukraine are not necessarily returnees and the sample is not representative of all persons crossing into Ukraine, results
should hence only be considered as indicative.