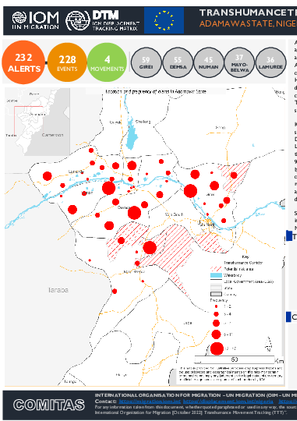 A transhumance is a practice of pastoralism while sedentary farming activities are usually a method of agriculture in which the same land is farmed every year. Both practices represent two of the main ancestry and extensive economic activities within the West and Central Africa Sahel region. Traditionally, In Adamawa state, the farmers’ and herders’ livelihoods have complemented each other and the instance of conflicts was addressed by the established conflict resolution mechanisms and the traditional institutions. However, over the past few decades, a wide range of factors have resulted in tensions often ending in deadly violent conflicts between the two groups. Factors such as population increment, desertification, climate change, inadequate rainfall and shrinking grazing lands have worsened the already delicate situation. These factors arguably lead to competition over the inelastic scarce natural resources and often set the stage for violent conflicts that contribute to the cause of farmer-herder conflicts in Adamawa.

Key informants, through the community focal person, submit alerts relating to transhumance activities that support the Early Warning System of Transhumance Tracking Tool (TTT) as a component of the IOM's Displacement Tracking Matrix (DTM). This report presents TTT Early Warning alerts collected in five LGAs of Adamawa State (Demsa, Girei, Lamurde, Numan and Mayo-Belwa) for September 2022. During this period under review, 232 alerts were recorded, including 228 events and 4 movements representing 98 and 2 per cent, respectively. Girei LGA recorded the highest number of alerts at 25 per cent, followed by Demsa LGA at 24 per cent and Numan at 19 per cent while Lamurde and Mayo-Belwa LGAs are16 per cent each. Disaggregated data suggested that Ndikong and Gereng wards in Mayo-Belwa LGAs, respectively recorded high numbers at 7 per cent each of the total event alerts for the month. Events alerts include agro-pastoral conflict, intra-and inter-community tensions, Kidnappings, robberies, accidents, and attacks, disasters due to natural hazard, cattle rustling/livestock theft, etc.