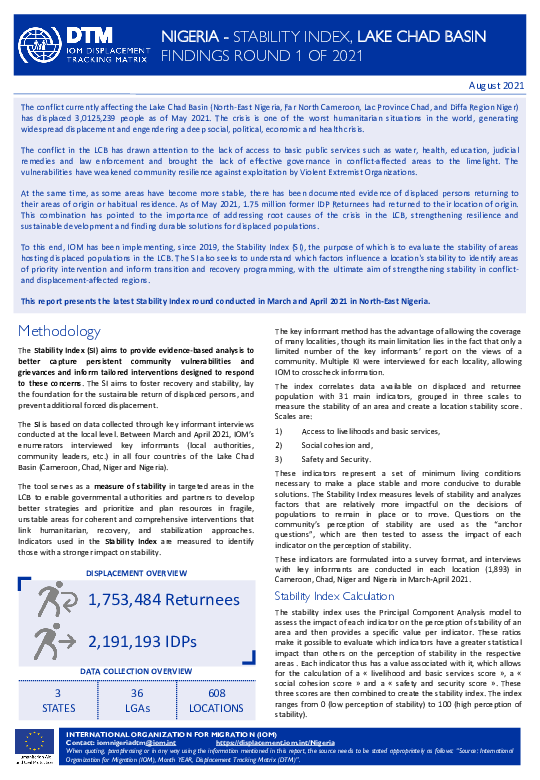 The crisis currently affecting the Lake Chad Basin (LCB), which has displaced 3,0125,239 Internally Displaced Persons as of May 2021, is one of the worst humanitarian situations in the world. The crisis, which is affecting North-East Nigeria, Far North Cameroon, Lac Province in Chad and Diffa Region in Niger, has generated widespread displacement and engendered a deep social, political, economic and health crisis.

The conflict in the LCB has drawn attention to lack of access to basic public services such as water, health, education, judicial remedies and law enforcement, and brought the lack of effective governance in conflict affected areas to the limelight. The vulnerabilities have weakened community resilience against exploitation by Violent Extremist Organizations.

At the same time, as some areas have become more stable, there has been documented evidence of displaced persons returning to their areas of origin or habitual residence. As of May 2021, 1.75 million former IDP Returnees had returned to their location of origin. This combination has pointed to the importance of addressing root causes of the crisis in the LCB, of strengthening resilience and sustainable development, and finding durable solutions for displaced populations.

To this end, IOM has been implementing, since 2019, the Stability Index (SI), the purpose of which is to evaluate the stability of areas hosting displaced populations in the LCB. The SI also seeks to understand which factors influence a location's stability, so as to identify areas if priority intervention and inform transition and recovery programming, with the ultimate aim of strengthening stability on conflict- and displacement-affected regions.