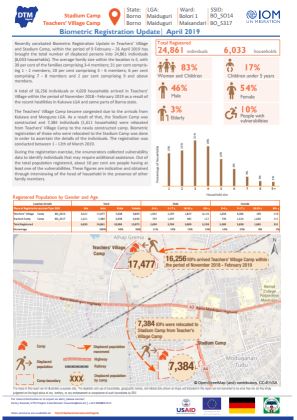 A total of 16,256 individuals or 4,020 households arrived in Teachers‘ Village within the period of November 2018 - February 2019 as a result of the recent hostilities in Kukawa LGA and some parts of Borno state.

The Teachers’ Village Camp became congested due to the arrivals from Kukawa and Monguno LGA. As a result of that, the Stadium Camp was constructed and 7,384 individuals (1,611 households) were relocated from Teachers’ Village Camp to the newly constructed camp. Biometric registration of those who were relocated to the Stadium Camp was done in order to ascertain the details of the individuals. The registration was conducted between 1 - 12th of March 2019.

During the registration exercise, the enumerators collected vulnerability data to identify individuals that may require additional assistance. Out of the total population registered, about 10 per cent are people having at least one of the vulnerabilities. These figures are indicative and obtained through interviewing of the head of household in the presence of other family members.