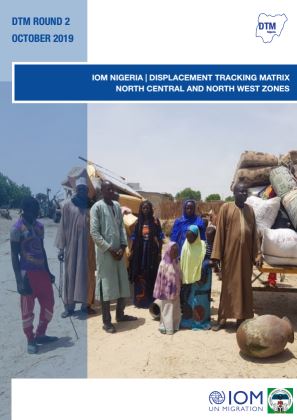 The geopolitical zones of North Central and North West in Nigeria have been affected by a multidimensional crisis, rooted in deep and historic rifts and rekindled in 2013 by worsening socioeconomic and environmental conditions in the two regions. The crisis accelerated in January 2018 with the intensification of attacks, leading to the displacement of hundreds of thousands of individuals. By the end of 2018, one million individuals had been displaced. While many of the IDPs displaced that year have been able to return, hundreds of thousands remain displaced for lack of security and the fear of being attacked en route or upon their return.

The crisis in North Central and North West is multifaceted, involving conflict between ethnic and language groups, tensions between transhumant and nomadic herders and sedentary farmers, as well as attacks by criminal groups on local populations and banditry, such as kidnapping and grand larceny along major highways. These security incidents often cross-cut inter-religious tensions, in particular in North Central, and specifically in Plateau state. The crisis continues to displace populations on a regular basis in the states of Benue, Nasarawa and Plateau (North Central) and Kaduna, Kano, Sokoto, Katsina and Zamfara (North West).

One of the crisis’ main issue is the dispute between herders and farmers. Transhumant cattle rearers and raisers and sedentary farmers historically cohabitated in the region, with transhumant herders accompanying cattle along transhumance corridors, cutting through farmland, in search of water points and land to graze. In recent years, as water sources and land to graze have declined, transhumance routes increasingly encroached on farmland, raising tensions between herders and farmers and often leading to violent clashes.

Another major topic of contention in the affected regions are communal conflicts pitting ethnic and language-based communities. These tensions date back to the division of the country into states, which separated ethnic and language groups and led to the forced cohabitation of often antagonistic groups. Tensions over resources and land, exacerbated by climate change, have escalated into communal conflicts that have displaced significant numbers of people.

IOM’s Displacement Tracking Matrix (DTM) was first implemented in Nasarawa and Abuja in August 2015. After the crisis in North West and Central Nigeria flared in early 2018, providing support to affected populations became paramount. As a result, the International Organization for Migration (IOM) broadened the reach of its DTM to the entire affected area, to assess the numbers and trends of displacement and gain insight into the profiles, needs and vulnerabilities of displaced populations. The information collected seeks to inform the government of Nigeria as well as and the humanitarian community with a better understanding of population movement and displacement in the two zones and aims at better informing response activities and relief provision for affected populations.