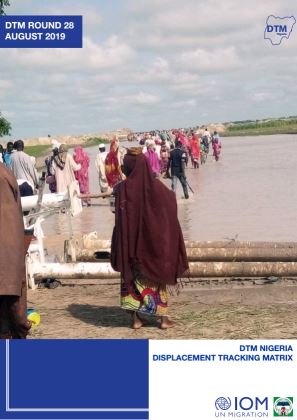 This report of the Round 28 Displacement Tracking Matrix (DTM) assessment by the International Organization for Migration (IOM) aims to improve the understanding about the scope of internal displacements, returns and the needs of affected populations in conflict-affected states of north-eastern Nigeria. The report covers the period of 1 July to 16 July 2019 and reflects trends from the six most affected north-eastern states of Adamawa, Bauchi, Borno, Gombe, Taraba and Yobe.

Over the Round 28 reporting period, a nominal increase in numbers of internally displaced people (IDPs) was observed but hostilities and increased insecurities continued to restrict coverage of DTM assessments – in-line with the previous round of assessment that were published in May 2019. In all, 2,018,513 individuals were recorded as being displaced in the affected states in Round 28, an increase of 2 per cent or 38,477 as against 1,980,036 IDPs that were recorded in Round 27. In addition to the ongoing conflict, communal clashes also played a part in increased population mobility.
The figure is almost at par with the number of displaced persons recorded in Round 25, which was carried out before the onset of the current escalation of violence in October 2018, when a significantly higher number of Local Government Areas (LGAs) and wards were accessible. In DTM Round 25 assessment, 2,026,602 people were recorded as IDPs.

To gain insights into the profiles of IDPs, interviews were conducted with 4 per cent of the identified IDP population — that is, 87,875 displaced persons — during this round of assessments. The information collated and analysed in this report includes the reasons for displacement, places of origin and dwelling types, mobility patterns, and unfulfilled needs of the displaced populations.

Additionally, site assessments were carried out in 2,385 sites – nominally more than the 2,383 sites that were accessed in the last round of assessment that was published in May for gaining a better understanding the needs of the affected population. These sites included 294 (281 in last round) camps and camp-like settings and 2,091 (down from 2,102 in last assessment) locations where IDPs were residing with host communities. Site assessments included an analysis of sector-wide needs, including shelter and non-food items, water, sanitation and hygiene (WASH), food and nutrition, health, education, livelihood, security, communication and protection.
Given that the State of Borno is the most affected by conflict-related displacements, this report places a specific focus on data and analyses pertaining to it. Lastly, this report includes analyses on the increasing number of returnees, profile of their initial displacement, shelter conditions of returnees, health, education, livelihood, market, assistance and WASH facilities available to the returnees.