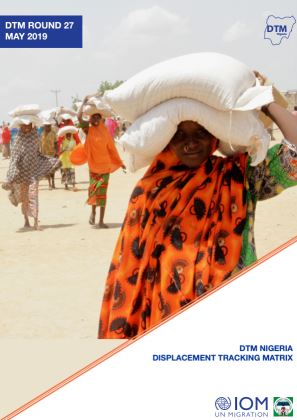 DTM Round 27 assessments were carried out from 25 March to 29 May 2019 in 107 LGAs including 795 wards in the conflict-affected north-eastern Nigerian states of Adamawa, Bauchi, Borno, Gombe, Taraba and Yobe. As per the assessment, 1,980,036 individuals were recorded as being displaced in the affected states, a nominal increase of less than two per cent, or 31,687 individuals, from the number of IDPs recorded in the previous round of assessment conducted in January 2019.

The number, however, is lower than the 2,026,602 IDPs recorded in Round 25, which was carried out before the onset of the current escalation of violence in October 2018. The number of areas accessible to humanitarian actors has been steadily decreasing on account of the exponential increase in attacks and kidnappings by Non-State Armed Groups (NSAG), counter offensives by the Nigerian security forces and the overall deterioration in the security situation.

In fact, the reduction in numbers of IDPs and locations accessed in the last 2 rounds of assessment is a marked deviation from the trends since December 2017 and should be understood not as an actual drop in numbers, but as a result of the restricted coverage of assessments. To illustrate, 1.7 million IDPs were recorded in February 2018. This number increased to 2 million by October 2018. Similarly, 110 LGAs with 807 wards were accessible during Round 25 and only 2 LGAs were inaccessible, namely: Abadam and Marte. But in Round 26, 13 wards were inaccessible and populous LGAs like Guzamala, Kukawa and Kala/Balge in the most-affected State of Borno were no longer accessible. Likewise, in Round 27, only 107 LGAs were accessible.LGAs like Guzamala, Kukawa and Kala/ Balge remained inaccessible. Access was gained in 1 ward since Round 26 was conducted in January 2019.

Lastly, the number of sites assessed by DTM enumerators also decreased in DTM Round 27 assessments. Only 2,383 locations could be assessed during Round 27, which represents a 3 per cent reduction over the 2,457 locations that were assessed in Round 26.