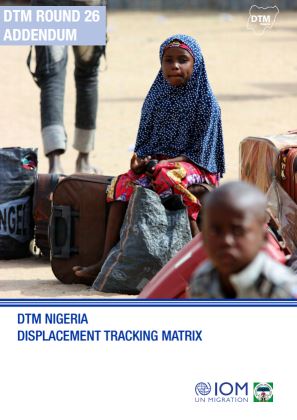 This is an addendum to IOM’s Round 26 Displacement Tracking Matrix (DTM) Assessment Report to provide explanations and background information to the trends in displacement numbers presented in the report. The Round 26 report covers the period from 20 October 2018 to 20 January 2019 and provides displacement figures in the six states most affected by the current crisis besieging north-eastern Nigeria (Adamawa, Bauchi, Borno, Gombe, Taraba and Yobe).

Over the Round 26 reporting period, escalation in hostilities significantly restricted coverage of DTM assessments. Growing insecurity and an increasing number of attacks led to a reduction in the number of locations which humanitarian actors, including DTM enumerators, could access. This impacted the geographic coverage of assessments, reflected in the numbers of internal displacements and returnees recorded in conflict-affected states of north-eastern Nigeria.

In all, 1,948,349 individuals were recorded as being displaced in the affected states in Round 26, a decrease of four per cent (or 78,253 individuals) in the number of IDPs recorded since the last round of assessment published in November 2018.

The reduction in numbers was a marked difference from the increasing trend of internally displaced populations (IDPs) recorded since December 2017. Round 26 assessments could not be carried out in as many as 13 wards due to intensified clashes between the military and non-state armed groups (NSAG). Returns was another key factor for the reduction besides inaccessibility.