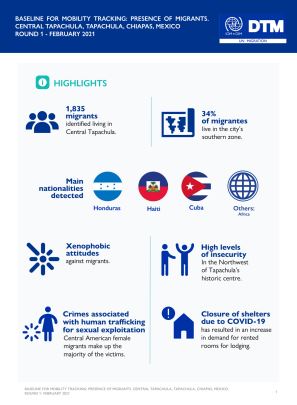 The World Migration Report 2020 (International Organization for Migration, 2020), notes that Mexico is increasingly becoming a destination country for international migrants, some of whom remain in this country because they are unable to enter the United States as planned, and reports an increase in the number of extra-regional migrants transiting through Central America and Mexico on their journeys to the United States.

The southern border of Mexico is a region with a strong process of daily cross-border mobility, indicating that the mobility of the Central American population in Tapachula is not a new phenomenon. Since the beginning of 2019, there has been an exponential increase in the arrival of migrants from Africa, Haiti, Cuba and, to a lesser extent, Asia.

Currently, a large number of migrants have had to remain in the municipality of Tapachula, mainly in urban areas, waiting for the resolution of the National Institute of Migration (INM) on their migratory status or, alternatively, waiting for their resolution by the Mexican Commission for Refugee Aid (COMAR) on their request for refugee status in the country. As a result of these events, the migrant population has settled temporarily in different areas of Tapachula, and the central sector stands out as an area with a marked presence of migrant population.

This is why the IOM seeks to conduct a data collection under the DTM methodology, in order to generate information on the presence of migrants in Tapachula to generate profiles of the migrant population with emphasis on integration and labor migration.