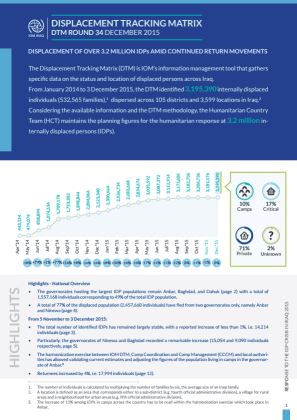 During this round, The total number of identified IDPs has remained largely stable, with a reported increase of less than 1%, i.e. 14,214 individuals. Particularly, the governorates of Ninewa and Baghdad recorded a remarkable increase (15,054 and 9,090 individuals respectively). Returnees increased by 4%, i.e. 17,994 individuals. At the national level, The governorates hosting the largest IDP populations remain Anbar, Baghdad, and Dahuk with a total of 1,557,168 individuals corresponding to 49% of the total IDP population. A total of 77% of the displaced population (2,457,660 individuals) have fled from two governorates only, namely Anbar and Ninewa. From January 2014 to 3 December 2015, the DTM identified 3,195,390 internally displaced individuals (532,565 families), dispersed across 105 districts and 3,599 locations in Iraq. Considering the available information and the DTM methodology, the Humanitarian Country Team (HCT) maintains the planning figures for the humanitarian response at 3.2 million internally displaced persons (IDPs).