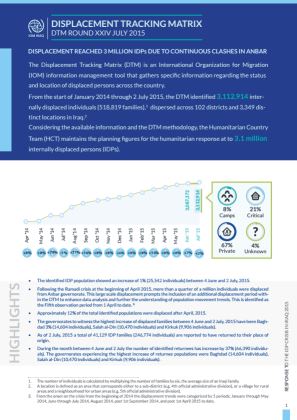 The identified IDP population showed an increase of 1% (25,542 individuals) between 4 June and 2 July, 2015. Following the Ramadi crisis at the beginning of April 2015, more than a quarter of a million individuals were displaced from Anbar governorate. This large scale displacement prompts the inclusion of an additional displacement period within the DTM to enhance data analysis and further the understanding of population movement trends. This is identified as the Fifth observation period from 1 April to date. Approximately 12% of the total identified populations were displaced after April, 2015. The governorates to witness the highest increase of displaced families between 4 June and 2 July, 2015 have been Baghdad 3% (14,604 individuals), Salah al-Din (10,470 individuals) and Kirkuk (9,906 individuals). As of 2 July, 2015 a total of 41,129 IDP families (246,774 individuals) are reported to have returned to their place of origin. During the month between 4 June and 2 July the number of identified returnees has increase by 37% (66,390 individuals). The governorates experiencing the highest increase of returnee populations were Baghdad (14,604 individuals), Salah al-Din (10,470 individuals) and Kirkuk (9,906 individuals). From the start of January 2014 through 2 July 2015, the DTM identified 3,112,914 internally displaced individuals (518,819 families), dispersed across 102 districts and 3,349 distinct locations in Iraq. Considering the available information and the DTM methodology, the Humanitarian Country Team (HCT) maintains the planning figures for the humanitarian response at to 3.1 million internally displaced persons (IDPs).