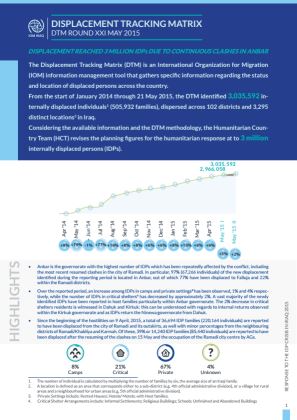 Over the reported period, an increase among IDPs in camps and private settings has been observed, 1% and 4% respectively, while the number of IDPs in critical shelters4 has decreased by approximately 2%. A vast majority of the newly identified IDPs have been reported in host families particularly within Anbar governorate. The 2% decrease in critical shelters residents is witnessed in Dahuk and Kirkuk; this can be understood with regards to internal returns observed within the Kirkuk governorate and as IDPs return the Ninewa governorate from Dahuk. Since the beginning of the hostilities on 9 April, 2015, a total of 36,694 IDP families (220,164 individuals) are reported to have been displaced from the city of Ramadi and its outskirts, as well with minor percentages from the neighbouring districts of Ramadi/Khaldiya and Karmah. Of these, 39% or 14,240 IDP families (85,440 individuals) are reported to have been displaced after the resuming of the clashes on 15 May and the occupation of the Ramadi city centre by AGs. At the national level, Anbar is the governorate with the highest number of IDPs which has been repeatedly affected by the conflict, including the most recent resumed clashes in the city of Ramadi. In particular, 97% (67,266 individuals) of the new displacement identified during the reporting period is located in Anbar, out of which 77% have been displaced to Falluja and 22% within the Ramadi districts. From the start of January 2014 through 21 May 2015, the DTM identified 3,035,592 internally displaced individuals1 (505,932 families), dispersed across 102 districts and 3,295 distinct locations in Iraq. Considering the available information and the DTM methodology, the Humanitarian Country Team (HCT) revises the planning figures for the humanitarian response at to 3 million internally displaced persons (IDPs).