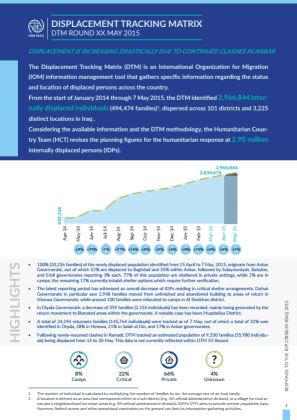 100% (20,236 families) of the newly displaced population identified from 25 April to 7 May, 2015, originate from Anbar Governorate, out of which 52% are displaced to Baghdad and 35% within Anbar, followed by Sulaymaniyah, Babylon, and Erbil governorates reporting 3% each. 77% of this population are sheltered in private settings, while 2% are in camps; the remaining 17% currently inhabit shelter options which require further verification. The latest reporting period has witnessed an overall decrease of IDPs residing in critical shelter arrangements. Dohuk Governorate in particular saw 2,948 families moved from unfinished and abandoned building to areas of return in Ninewa Governorate, while around 100 families were relocated to camps in Al Sheikhan district. In Diyala Governorate, a decrease of 359 families (2,154 individuals) has been recorded, mainly being generated by the return movement to liberated areas within the governorate. A notable case has been Muqdadiya District. A total of 24,294 returnees families (145,764 individuals) were tracked as of 7 May, out of which a total of 32% were identified in Diyala, 28% in Ninewa, 21% in Salah al Din, and 17% in Anbar governorates. Following newly-resumed clashes in Ramadi, DTM tracked an estimated population of 9,330 families (55,980 individuals) being displaced from 15 to 20 May. From the start of January 2014 through 7 May 2015, the DTM identified 2,966,844 internally displaced individuals (494,474 families)1, dispersed across 101 districts and 3,225 distinct locations in Iraq. Considering the available information and the DTM methodology, the Humanitarian Country Team (HCT) revises the planning figures for the humanitarian response at 2.95 million internally displaced persons (IDPs).