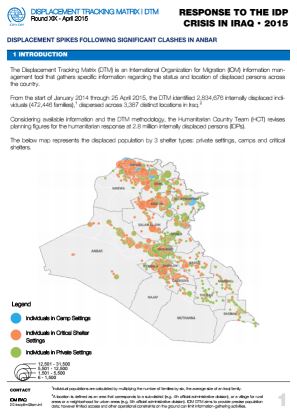 Following the outbreak of the Ramadi crisis around 10 April, DTM tracked 133,104 individuals (22,184 families) displaced across fifteen governorates (DTM Anbar crisis update – 8 May). Among the most affected by this crisis are Baghdad (62% or 83,172 individuals) and Anbar (18% or 24,552 individuals) governorates, followed by Babylon (6% or 7,392 individuals) and Sulaymaniyah (5% or 6,504 individuals). So far, an estimated 16,440 individuals have returned to Markaz Ramadi sub-district, center of Ramadi district. The majority of this population quoted the lack of a sponsor to be granted access to Baghdad as the reason they returned to Ramadi instead of settling in Baghdad. Based on the initial field reports, areas of return are under ISF control. The second round of returnee tracking recorded a total of 116,850 individuals (19,475 families) as having returned to their districts of origin. Diyala shows the highest returnee population with 37% (43,044 individuals), out of which 73% are reported to be returning from other areas within the governorate. Preliminary findings indicates that 77% of the total returnee population re-settled in their locations of usual residence within their district of origin, while 19% have returned to unfinished or abandoned buildings. From the start of January 2014 through 25 April 2015, the DTM identified 2,834,676 internally displaced individuals (472,446 families), dispersed across 3,387 distinct locations in Iraq. Considering available information and the DTM methodology, the Humanitarian Country Team (HCT) revises planning figures for the humanitarian response at 2.8 million internally displaced persons (IDPs).