Honduras-Baseline assessment of migration flows and mobiity tracking within the context of COVID-19 report #6 (June, 2021) 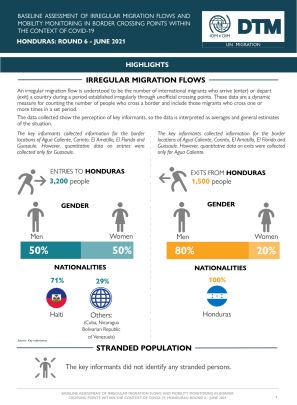 For this round, the key informants reported an increase in the number of migrants in transit from Haiti, Cuba and African and Asian countries at the border with Nicaragua. These migrants, particularly those from Haiti and Nicaragua, expressed that they were migrating mainly for economic, political and social reasons. According to the information provided by the interviewed persons, an increase is expected in the number of migrants who will transit through the country in the coming months.

The number of Nicaraguan migrants has increased. However, these migrants are entering and exiting Honduran territory regularly. Up to 3 buses with foreign nationals cross the southern border of Honduras. These persons are tourists and fulfil the requirements of the National Institute of Migration for exiting the territory in a regular manner.

The flow of Honduran migrants travelling toward North America remains constant. The interviewed persons stated that most of the Honduran migrants express a desire to migrate for economic reasons, as they do not have a job in their country of origin. The COVID-19 pandemic has had a significant economic impact on Honduras, as have hurricanes ETA and IOTA, leading to an increase in unemployment rates. The key informants stated that migrants are rural populations and are aged 18-35 years.

According to the Consular and Migration Observatory of Honduras (CONMIGHO), 5,645 Honduran migrants returned to the country in May and 4,511 in June 2021, most of them returning from Mexico.[1] These data are provided as a reference and reflect the situation at the borders, as they represent irregular and regular flows of migrants who entered the country through the northern border.