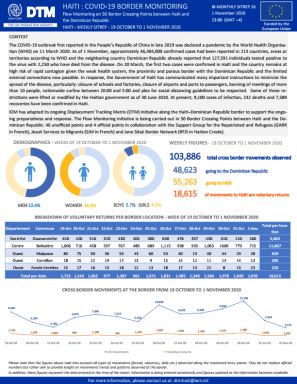 The COVID-19 outbreak first reported in the People’s Republic of China in late 2019 was declared a pandemic by the World Health Organisa-tion (WHO) on 11 March 2020. As of 1 November, approximately 46,404,000 confirmed cases had been reported in 213 countries, areas or territories according to WHO and the neighboring country Dominican Republic already reported that 127,591 individuals tested positive to the virus with 2,250 who have died from the disease. On 20 March, the first two cases were confirmed in Haiti and the country remains at high risk of rapid contagion given the weak health system, the proximity and porous border with the Dominican Republic and the limited external connections now possible. In response, the Government of Haiti has communicated many important instructions to minimize the spread of the disease, particularly: closure of schools and factories, closure of airports and ports to passengers, banning of meetings of more than 10 people, nationwide curfew between 20:00 and 5:00 and plea for social distancing guidelines to be respected. Some of these re-strictions were lifted or modified by the Haitian government as of 30 June 2020. At present, 9,100 cases of infection, 232 deaths and 7,589 recoveries have been confirmed in Haiti.

IOM has adapted its ongoing Displacement Tracking Matrix (DTM) initiative along the Haiti–Dominican Republic border to support the ongo-ing preparedness and response. The Flow Monitoring initiative is being carried out in 50 Border Crossing Points between Haiti and the Do-minican Republic: 46 unofficial points and 4 official points in collaboration with the Support Group for the Repatriated and Refugees (GARR in French), Jesuit Services to Migrants (SJM in French) and Jano Siksè Border Network (RFJS in Haitian Creole).