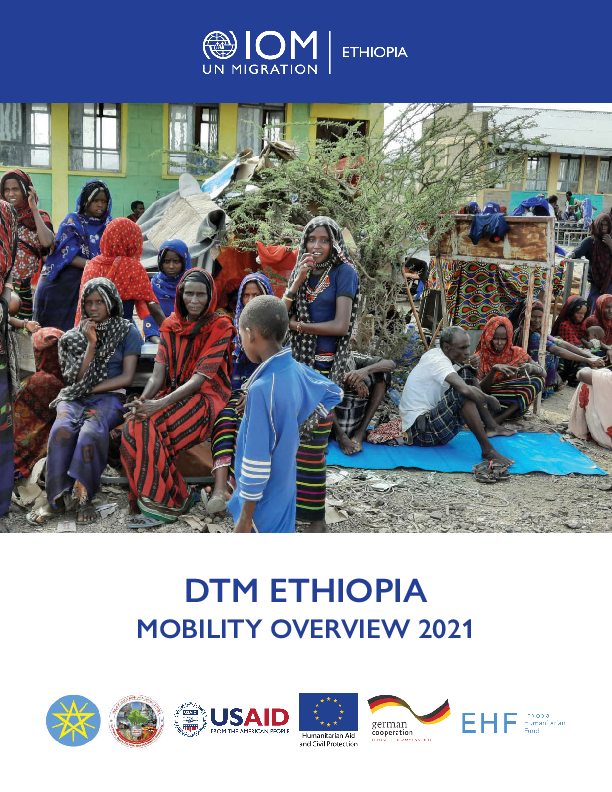 The Mobility Overview 2021 report details significant movements within the country and a national overview of displacement and returns, which mainly draws from DTM’s Site Assessment, Emergency Site Assessment, Village Assessment Survey and an extensive national network of key informants.

As of September 2021, displacement was estimated at 4.23 million internally displaced persons (IDPs) throughout Ethiopia. With the outbreak of the Northern Ethiopia Crisis, the Emergency Site Assessment round 8 estimated that there were 2.11 million IDPs displaced due to the Northern Ethiopia Crisis in August 2021 – 1.8 million IDPs displaced in Tigray, 151,040 IDPs in Amhara and 149,329 IDPs in Afar regions. In the second half of 2021, armed conflict moved further down south which resulted in an increase in the number of IDPs in Amhara and Afar regions which is estimated by key informants to have reached around 1.4 million IDPs and 470,000 IDPs respectively at the peak of displacement in early December 2021. Nevertheless, by the end of December 2021, mass returns were taking place in Amhara region. Displacement in the rest of Ethiopia is estimated at 2.12 million IDPs, according to Site Assessment round 27 which took place in August and September 2021. The primary cause of displacement was conflict in 1,160 sites (74%), and the primary reason IDPs were unable to return was that their houses were either damaged or destroyed (1,138 sites, 72%). In addition to conflict, climate induced displacement (droughts, flash floods and seasonal floods) were the primary cause of displacement in 353 sites (22%).

Regarding returns, DTM identified 1.5 million returning IDPs as of Village Assessment Survey round 10 in August and September 2021. A large number of returning IDPs were concentrated in Dawa zone, Somali region and were first identified through round 9 of the Village Assessment Survey when they began to return following the dry season to reconstruct homes that were damaged and in West Guji zone, Oromia region, following the Gedeo-West Guji Crisis in 2018. It is estimated that there have been significant returns in Tigray region as well but this could not be verified in person due to resource constraints and other operational challenges.