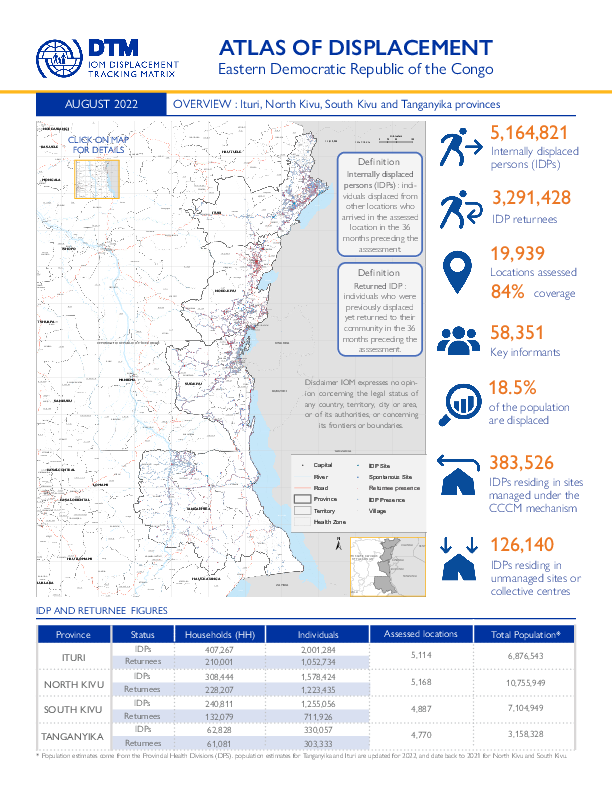 IOM - through the Displacement Tracking Matrix (DTM) - has conducted Mobility Tracking (MT) assessments since 2018. These exercises are implemented in Ituri, North and South Kivu, and Tanganyika provinces with the objective of providing estimates on the presence, number of affected population groups (IDPs, returnees), reasons for displacement, length of displacement and specific needs within defined locations.

The summary statistics presented in this report are pulled from the latest Mobility Tracking rounds for each province which took place between April and May 2022 to produce an aggregated overview of the displacement situation in the eastern region of DRC. In the four Eastern provinces of the Democratic Republic of the Congo (DRC), which includes Ituri, North Kivu, South Kivu and Tanganyika provinces, DTM identitied 5,164,821 internally displaced persons (IDPs) and 3,291,428 returnees as of May 2022, present in 64 per cent of the assessed villages. Overall IDP figures are as follows: with 39 per cent of IDPs (2,001,284 individuals) located in Ituri, followed by 31 per cent (1,578,424) in North Kivu, 24 per cent (1,255,056) in South Kivu and 6 per cent (330,057) in Tanganyika.