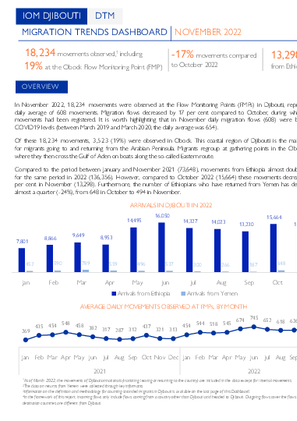 In November 2022, 18,234 movements were observed at the Flow Monitoring Points (FMPs) in Djibouti, representing a daily average of 608 movements. Migration flows decreased by 17 per cent compared to October, during which 22,083 movements had been registered. It is worth highlighting that in November daily migration flows (608) were below preCOVID19 levels (between March 2019 and March 2020, the daily average was 654).

Of these 18,234 movements, 3,523 (19%) were observed in Obock. This coastal region of Djibouti is the main gateway for migrants going to and returning from the Arabian Peninsula. Migrants regroup at gathering points in the Obock region where they then cross the Gulf of Aden on boats along the so-called Eastern route.