Climate and Migration in East and the Horn of Africa: Spatial Analysis of Migrants’ Flows Data 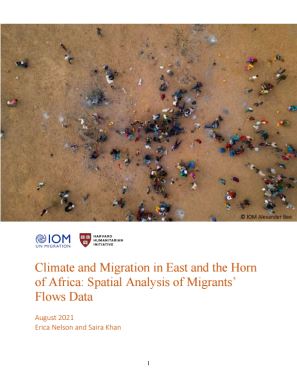 The drivers of human displacement are becoming more and more complex, ranging from conflict and persecution to the increasingly pertinent variables of heightened mobility and social media influences. Of rapidly but appropriately escalating concern is the impact of climate change. While the intensity and severity of climate-induced disasters and climate-related migration will be unevenly distributed across space and time, the World Bank estimates that approximately 140 million people will be displaced globally due to climate-related reasons by 2050. The effects of climate change are expected to be particularly pronounced in Africa, where rising temperatures, unpredictable anomalous rainfall and high vulnerability to extreme natural hazards will continue to exacerbate conflict and harm local and regional human, economic, and environmental security.

In the East and Horn of Africa (EHoA) in particular, the dependence on rain-fed agriculture and pastoralism means that livelihoods and food security are inextricably linked and affected by long-term or sudden environmental changes and natural hazards. The extreme natural hazards that have struck EHoA in recent years have caused widespread hunger, displacement, loss of critical infrastructure and livelihoods, and death

In an effort to understand the complex variables that influence migration, the International Organization for Migration (IOM) developed the Displacement Tracking Matrix (DTM) to track and gather information about populations on the move. The Flow Monitoring Registry (FMR) captures a wealth of data about the migratory routes, the demographics and nationality of migrants, reasons for migration, modes of transportation used to facilitate movement, and vulnerabilities experienced by these populations. While the descriptive data provides a wealth of information, more can be done to analyze the complexities of and interactions between migration, conflict, environmental changes, and climate-related events. Climate projections further suggest that environmental changes will likely further lead to decreased water availability, lowered agricultural productivity, and increased disease transmission in the region, producing complex ramifications regarding local and regional conflicts, economics, politics, and migration.

The porous borders in EHoA have contributed to some of the highest volumes of cross border movement in the world. In 2020 alone, EHoA hosted 6.5 million internally displaced persons (IDPs) and 3.5 million refugees and asylum seekers.6 In the same year, the Horn of Africa experienced unusually high levels of precipitation leading to disastrous floods and landslides and creating ideal conditions for an detrimental locust plague towards the end of 2019 that devastated crops and disrupted livelihoods. The extreme precipitation experienced across much of the Horn in 2019 was preceded by anomalous rainfall the previous year. 2018 was particularly hot and dry in the Horn of Africa, with positive temperature anomalies of around 2°C and below-average precipitation contributing to drought-like conditions in Somalia, Eritrea, and Djibouti while Kenya and Sudan experienced above-average precipitation.8 The drought-like conditions in Somalia, Eritrea, and Djibouti contributed to widespread food insecurity that affected approximately 12 million people. These extreme weather conditions are increasingly exacerbating the already complex and interconnected factors driving migration in the Horn of Africa, and are only expected to escalate in the future.

For this study, the IOM RDH in Nairobi partnered with the Humanitarian Geoanalytics Program at the Harvard Humanitarian Initiative to leverage spatial analytics to investigate migration flows in the East and Horn of Africa and Yemen. Geospatial analytics hold tremendous potential to introduce new ways of thinking, build research capacity, study impacts, and facilitate costeffective programming. The adoption of geospatial methods into research oriented towards populations on the move, gives us the capacity to accurately characterize the spatial heterogeneity of migrating populations. Furthermore, by incorporating environmental variables into this spatial analysis, we begin to reveal relationships previously undiscovered that could contribute to a richer understanding regarding migration in the region.