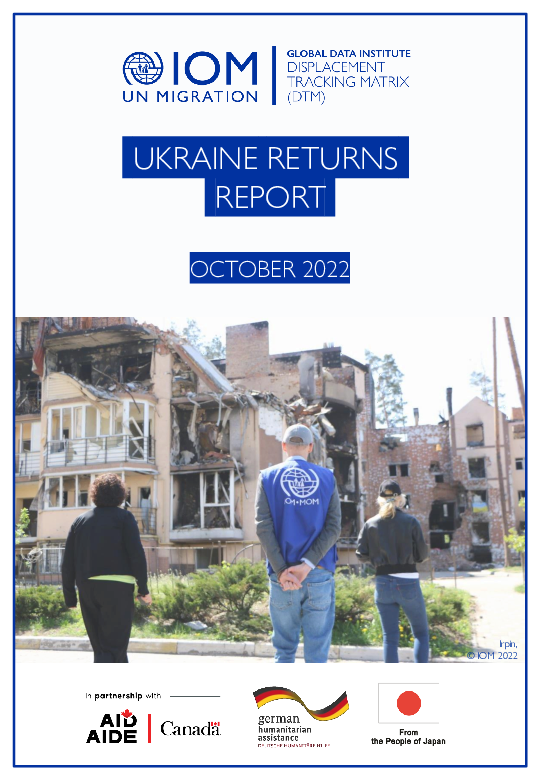 Starting on 24 February 2022, a large-scale armed conflict in Ukraine triggered an unprecedented humanitarian crisis across the country, characterised, among other elements, by the displacement of a significant proportion of the Ukrainian population.

As early as April 2022, the International Organization for Migration (IOM) began observing significant return movements. Conditions of return vary widely, as returnees arrive back to areas not directly affected by the war, but which have experienced a significant influx of internally displaced persons (IDPs), as well as to conflict-affected and recently de-occupied areas which have sustained severe damage. Due to the volatility of the current situation, it is impossible to determine what proportion of the returns observed at present are permanent or temporary. Existing data shows, however, that the returnee population in Ukraine is characterized by a unique set of needs and vulnerabilities which set it apart from those who had never been displaced and from the population of IDPs.

To support partners in providing targeted, evidence-based assistance to those returning to their areas of habitual residence following a period of forced displacement, IOM presents the Ukraine Returns Report. This publication will strive to analyze IOM’s latest data on the situation and needs of the returnee population and on the conditions of return, collected through the Displacement Tracking Matrix (DTM) assessments conducted in the country.

This October 2022 edition of the Ukraine Returns Report presents a detailed analysis of data collected through the ninth round of IOM’s General Population Survey (GPS), conducted between 17 and 27 October among the adult population in Ukraine. The geographical scope of the assessment covers the entire territory of Ukraine, all five macro-regions (West, East, North, Centre, South, and the city of Kyiv), with the exception of the Crimean peninsula and the non-government-controlled-areas of Ukraine (NGCA). The general population survey was conducted using a random‐digit‐dial (RDD) approach, and 2,002 unique and anonymous respondents aged 18 and over were interviewed using the computer-assisted telephone interview (CATI) method.