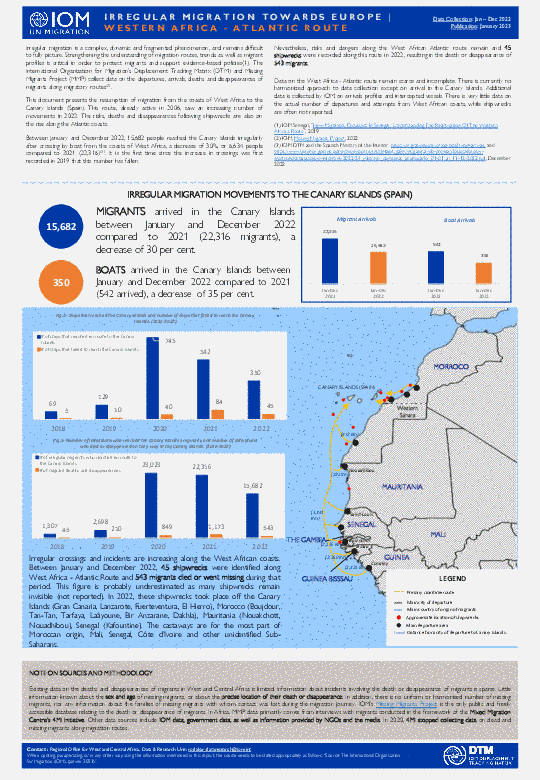 This document presents the resumption of migration from the coasts of West Africa to the Canary Islands (Spain). This route, already active in 2006, saw an increasing number of movements in 2022. The risks, deaths and disappearances following shipwrecks are also on the rise along the Atlantic coasts.

Between January and December 2022, 15,682 people reached the Canary Islands irregularly after crossing by boat from the coasts of West Africa, a decrease of 30%, or 6,634 people compared to 2021 (22,316)(3). It is the first time since the increase in crossings was first recorded in 2019 that this number has fallen.

Nevertheless, risks and dangers along the West African Atlantic route remain and 45 shipwrecks were recorded along this route in 2022, resulting in the death or disappearance of 543 migrants. 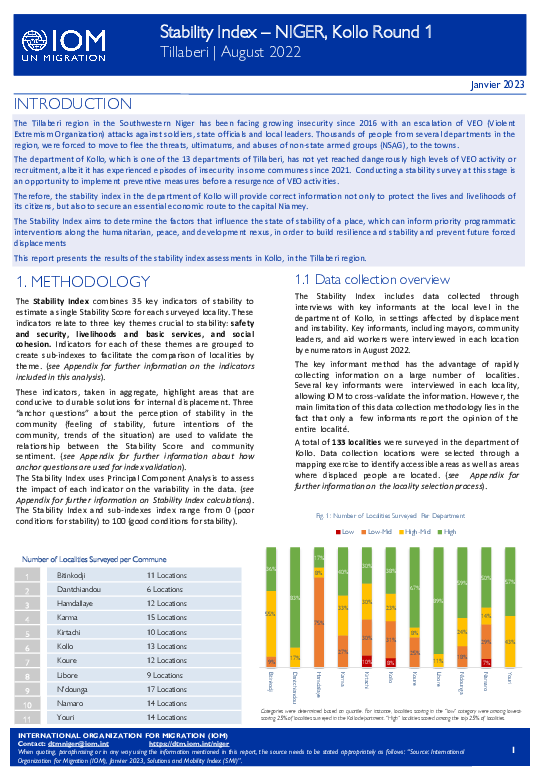 The Tillaberi region in the Southwestern Niger has been facing growing insecurity since 2016 with an escalation of VEO (Violent Extremism Organization) attacks against soldiers, state officials and local leaders. Thousands of people from several departments in the region, were forced to move to flee the threats, ultimatums, and abuses of non-state armed groups (NSAG), to the towns.

The department of Kollo, which is one of the 13 departments of Tillaberi, has not yet reached dangerously high levels of VEO activity or recruitment, albeit it has experienced episodes of insecurity in some communes since 2021.  Conducting a stability survey at this stage is  an opportunity to implement preventive measures before a resurgence of VEO activities.

Therefore, the stability index in the department of Kollo will provide correct information not only to protect the lives and livelihoods of its citizens, but also to secure an essential economic route to the capital Niamey.

The Stability Index aims to determine the factors that influence the state of stability of a place, which can inform priority programmatic interventions along the humanitarian, peace, and development nexus, in order to build resilience and stability and prevent future forced displacements

This report presents the results of the stability index assessments in Kollo, in the Tillaberi region. 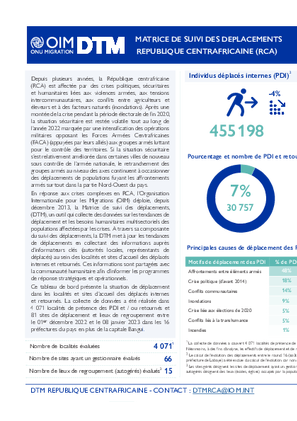 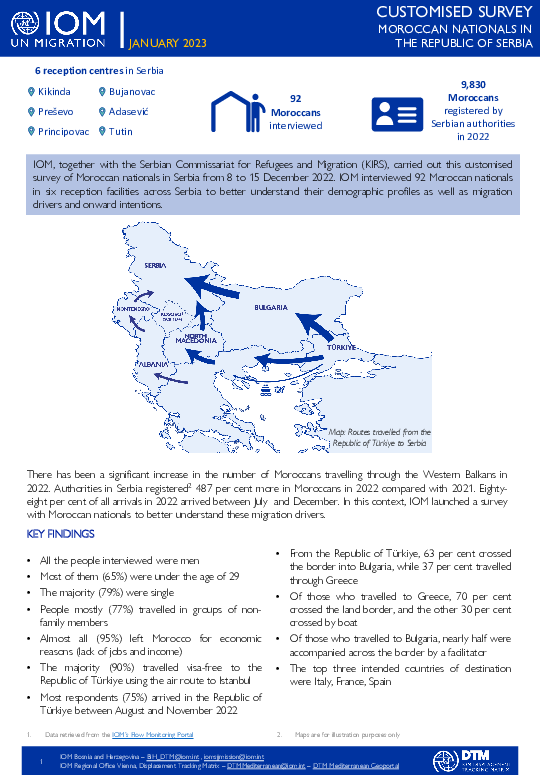 IOM, together with the Serbian Commissariat for Refugees and Migration (KRIS), carried our this customised survey of Moroccan nationals in Serbia from 8 to 15 December 2022. IOM interviewed 92 Moroccan nationals in six reception facilities across Serbia to better understand their demographic profiles as well as migration drivers and onwards intentions. 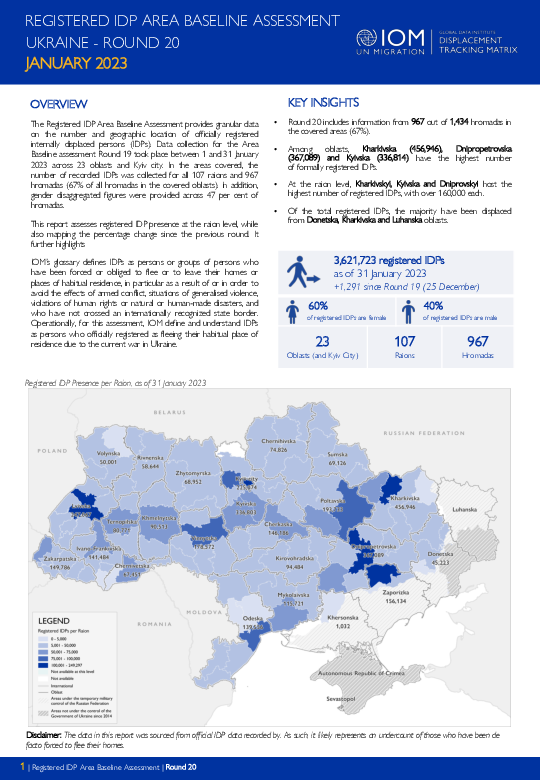 The Registered IDP Area Baseline Assessment provides granular data on the number and geographic location of officially registered internally displaced persons (IDPs). Data collection for the Area Baseline assessment Round 19 took place between 1 and 31 January 2023 across 23 oblasts and Kyiv city. In the areas covered, the number of recorded IDPs was collected for all 107 raions and 967 hromadas (67% of all hromadas in the covered oblasts). In addition, gender disaggregated figures were provided across 47 per cent of hromadas.

Contact
DTMUkraine@iom.int
Location
Ukraine
Activity
Period Covered
Jan 01 2023 -
Jan 31 2023
A baseline assessment is a sub-component of mobility tracking. It aims to collect data on IDP, migrant or returnee population presence in a defined administrative area of the country. 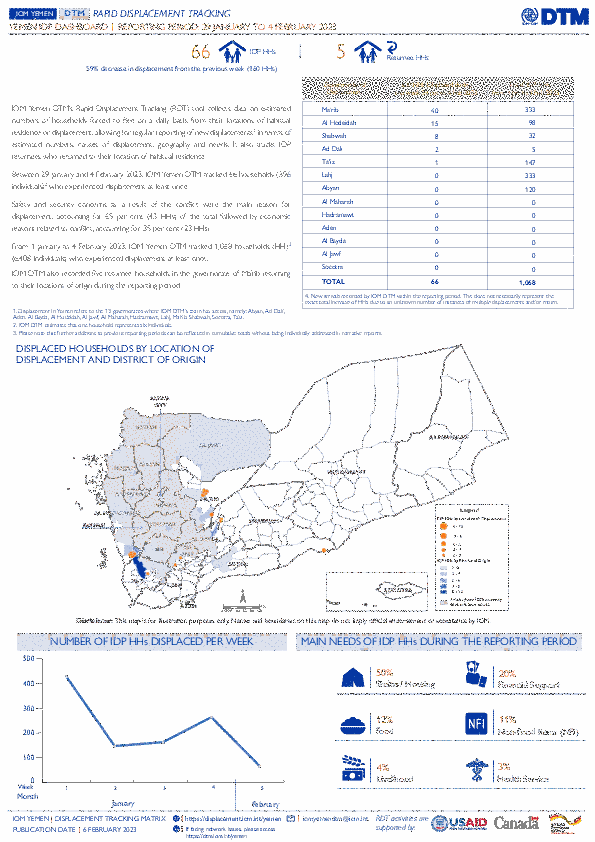 Between 29 January and 4 February 2023, IOM Yemen DTM tracked 66 households (396 individuals) displaced at least once. The majority of people moved into/within the following governorates and districts: 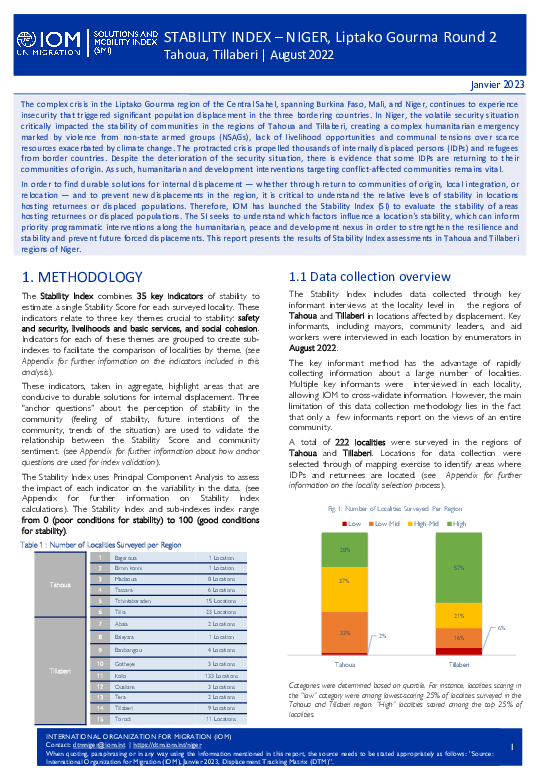 The complex crisis in the Liptako Gourma region of the Central Sahel, spanning Burkina Faso, Mali, and Niger, continues to experience insecurity that triggered significant population displacement in the three bordering countries. In Niger, the volatile security situation critically impacted the stability of communities in the regions of Tahoua and Tillaberi, creating a complex humanitarian emergency marked by violence from non-state armed groups (NSAGs), lack of livelihood opportunities and communal tensions over scarce resources exacerbated by climate change. The protracted crisis propelled thousands of internally displaced persons (IDPs) and refugees from border countries. Despite the deterioration of the security situation, there is evidence that some IDPs are returning to their communities of origin. As such, humanitarian and development interventions targeting conflict-affected communities remains vital. In order to find durable solutions for internal displacement — whether through return to communities of origin, local integration, or relocation — and to prevent new displacements in the region, it is critical to understand the relative levels of stability in locations hosting returnees or displaced populations. Therefore, IOM has launched the Stability Index (SI) to evaluate the stability of areas hosting returnees or displaced populations. The SI seeks to understand which factors influence a location's stability, which can inform priority programmatic interventions along the humanitarian, peace and development nexus in order to strengthen the resilience and stability and prevent future forced displacements. This report presents the results of Stability Index assessments in Tahoua and Tillaberi regions of Niger. 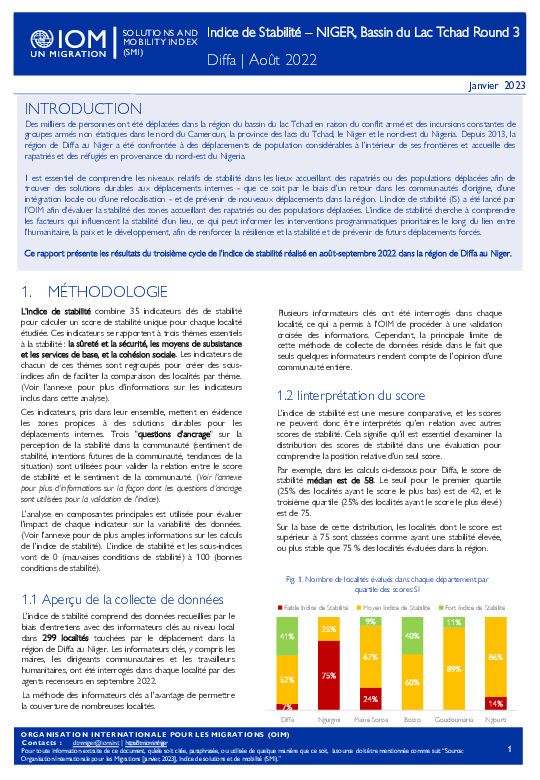